This is a blog post Im not sure how to write, to be honest. Some people may be offended that I am writing it, others judgemental, but at this point, it`s more for me than for others, except perhaps one person, about whom this post is written.

As many of you know, last year, I went through a tumultuous time and fell deeply in love with someone, who then broke up with me unexpectedly at a low point in my personal life, and this nearly destroyed me. I was hurt, wounded and definitely emotionally trampled into the ground. His words were harsh, and cruel and cut very deeply. Furthermore, in anger I lashed out at him in a blog post and this, apparently, offended him so deeply he no longer wanted to speak to me at all. This did not help closure for me, and I will be honest that not a day goes by that I don’t have a thought about him.

But now, almost a year after we met, things are very different. I am in a good place personally, and have moved on well, only now he is suffering, and dying from cancer.

It doesn’t help that he is a world away from me, and I honestly doubt he will even see this post before he passes on.

I no longer feel anger when I think of him, and have found myself focussing on the good time (albeit brief) that we had together. I am sad that it couldn’t have been more and that he didn’t really give us a chance to know one another better and that was his choice. He is in a relationship with someone who cares deeply for him, probably even more than I did, and now as the disease gnaws at his body, that person is there to support him and care for him, and I can only imagine the terrible pain his partner is feeling.

To him I would say that I am glad we met, and spent time together. And for those who know him now and are friends with him, the pain of losing him will never pass, but we are all richer for having known him. Take from him his positive and leave behind the things which make you sad.

So farewell, and may armies of angels welcome you and take away your pain and suffering. I wish I had known you better, and you me.
Posted by JohnnyNaughty at 10:56 No comments:

So much to catch up on!

SO much has happened since my last blog post – I guess it is time to actually get everyone up to speed.

For those of you who skipped a few entries, I decided to move to Calgary to be with the pups. This happened rather suddenly, and I had the daunting task of having to travel back to Ontario by Greyhound for 3 days and then start the arduous process of sorting and selling and packing my stuff. This was heightened in its intensity by the fact that i only got back to Ontario on July 15th, and had to vacate my apartment by July 31.

So for the first week home, i sorted stuff and held a yard sale, which was to finance the transportation of the rest of my stuff i wasn’t selling back to Calgary. This was an exceptionally stressful week, deciding what was of value and what wasn’t. Suffice it to say that I hate holding a yard sale, and – if I have the choice – I shall never EVER do so again. I have never come across a cheaper bunch of assholes than yard-salers, haggling over a dollar. It’s enough to make anyone go postal. I was glad when it was over.

The following week was packing in earnest and finally transporting my boxes to the company shipping them across Canada for me. I managed to complete it all by the deadline with some help of some friends, and made my flight back to Calgary on August 1. The flight was awesome – brief, almost turbulence free – and direct. Despite the hour and a half delay in departure, it was great to be back with the pups and back in Calagry, away from the humidity, and, quite frankly, the myriad of bad memories Ontario holds. Seeing Roscoe’s bright blue hair was a shock, but was also truly awesome! He is very proud of it!! 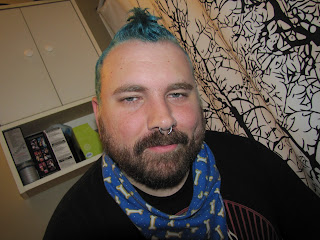 The day after I arrived home was Roscoe’s birthday, and he and Berith had booked an appointment for them each to get a PA done. Beriths went without a hitch, and you can read more about it on his blog here:  http://www.thehydrant.org/

With Roscoe, however, the piercer was not sure quite what to do. I don’t think she has had to deal with an uncut penis before, and, she said she would prefer not to attempt the piercing, but would rather her boss did it. While it was annoying and frustrating at the time, I have huge respect for her admitting she wasn’t comfortable with the procedure, even though, at the time it truly upset Roscoe. They rescheduled his appointment for the next day, and we went back to the shop to have it done. Different piercer and we were in and out within 20 minutes, one freshly pierced puppy.

Now, some of you may know that I am a bit of a sadist, and I have to confess that watching two puppies occasionally cringing  when they walked or bumped their penises did bring a slight smile to my face. But its actually not all that nice to see those one cares about hurting.

Friday evening was wonderful! My friend Scott W, whom some of you may recall moved out here a few months back, and his  boyfriend Kota had arranged a “Happy Birthday Berith and Roscoe, and Welcome back Johnny” BBQ with friends and members of the community. It was an awesome affair, with great food and awesome company, and the even flew by entirely too quickly! 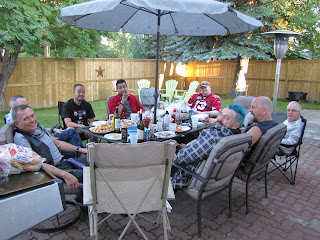 Sunday afternoon, and we suddenly were dressing smart casual and headed to Scotts place, final destination unknown. We piled into Scotts' car, Scott and I in front, and Berith, Kota and Roscoe in the back and hit the highway. It soon became apparent that we were headed to Banff, about an hour and a half away from Calgary, in the Canadian Rockies. 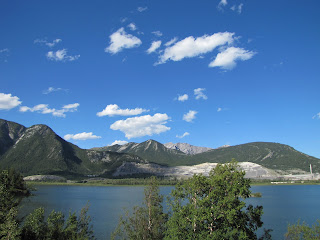 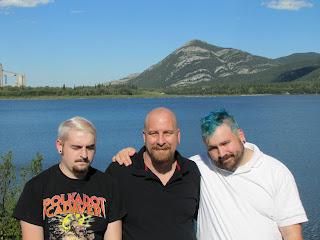 Scott and Kota were treating the three of us to Dinner at a charming restaurant called the Saltlik Steak House, and the meal, and company were, of course, excellent!! Have I ever mentioned in my blog posts how much I love the taste of beef? I really do enjoy a slice of dead cow. And I’m sorry if that is politically incorrect, or offends you in some way – but I was raised eating animals, and I don’t see anything wrong with it. 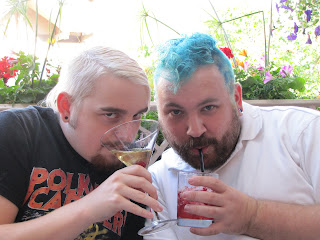 After dinner we took a brief excursion around Banff and saw the fantastically beautiful Banff Hotel, as well as a stop at Cascade gardens... which was disappointing as there were no cascades, only all the mosquitoes in Alberta. Still the Gardens were beautiful, without the water. 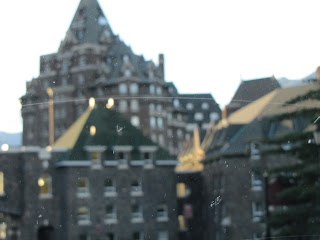 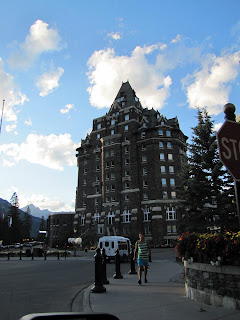 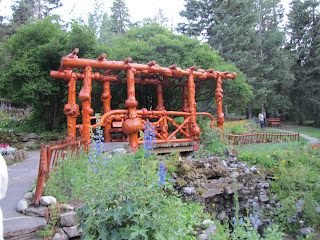 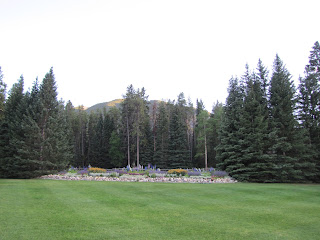 The drive home was quieter as we were all full and tired, Roscoe with his head out the window, Berith asleep and Kota nodding off comically in the middle while Scott and I focussed on the scenery. It was an awesome and unexpected surprise and truly appreciated and enjoyed. 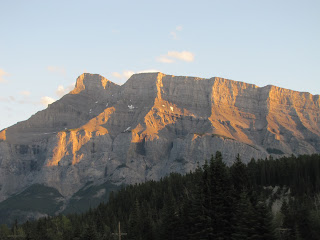 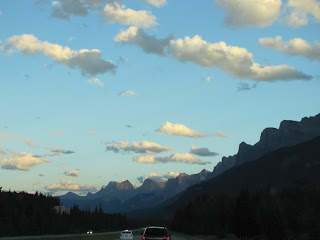 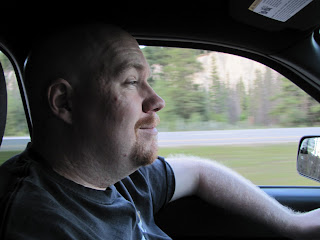 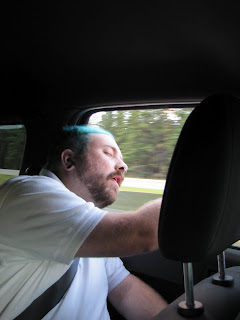 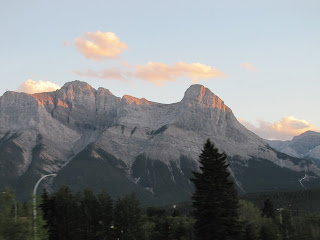 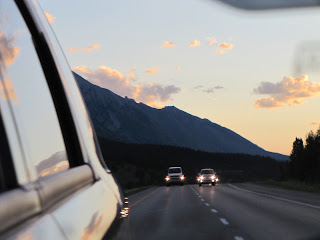 The rest of the week passed uneventfully, until Very late Wednesday night, when Roscoe started feeling unwell. We thought he had food poisoning. All day Thursday, he was throwing up, and experiencing very bad stomach cramps.  We treated him for food poisoning, but just after midnight, we decided the pain was too bad for food poisoning and it could possibly be appendix, so I drove him to ER. 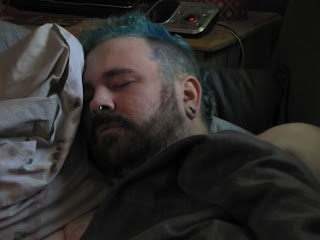 Roscoe and I spent the night in ER, and everyone who saw him for diagnosis concurred that it was, in fact, appendix. So they scheduled him for Surgery and took him in for it at 5:30am. As he was wheeled away, I left the hospital to come back and pick up Berith to head back to the hospital. I wanted to make sure Roscoe had both of us there when he came out of surgery. We had to wait almost 4 hours before they released him from recovery – they were concerned about his breathing being shallow, and think he may have sleep apnea too.

After a while Berith and I came back to the apartment so I could get some sleep – i didn’t sleep much or long =- perhaps an hour or two at most, before running a bunch of errands and making it back to the hospital to see Roscoe. Scott and Kota were already there, and the four of us escorted Roscoe on a long walk around the hospital, before they left and Berith and I settled Roscoe back in his room, and headed home.

Berith and I met Scott and Kota at the Eagle for a short while. Its kind of sad, the Calgary Eagle is closing its doors on September 2nd, and will not be around for a while. They are battling to find a new location, and, quite frankly, I think they all need a break for a while. Owning and running a bar can be a huge underlying stress, 7 days a week. So after Pride this year, Calgary will not have an Eagle – at least in the short term. (http://www.calgaryeagle.com/)

Managed to sleep quite well last night, despite being alone in the apartment, and am currently preparing to face Saturday, and visit Roscoe. The word from the hospital is that they will now be keeping him until Monday, as, upon closer examination, they found a hole in the appendix, and are afraid of infection. There are other situations going on, but I will be blogging about one in particular in a separate post, as it is more emotional and less `newsy`.

Feel free to comment or ask questions, as always! Johnny.
Posted by JohnnyNaughty at 10:07 No comments:

More of Johnny on the Web